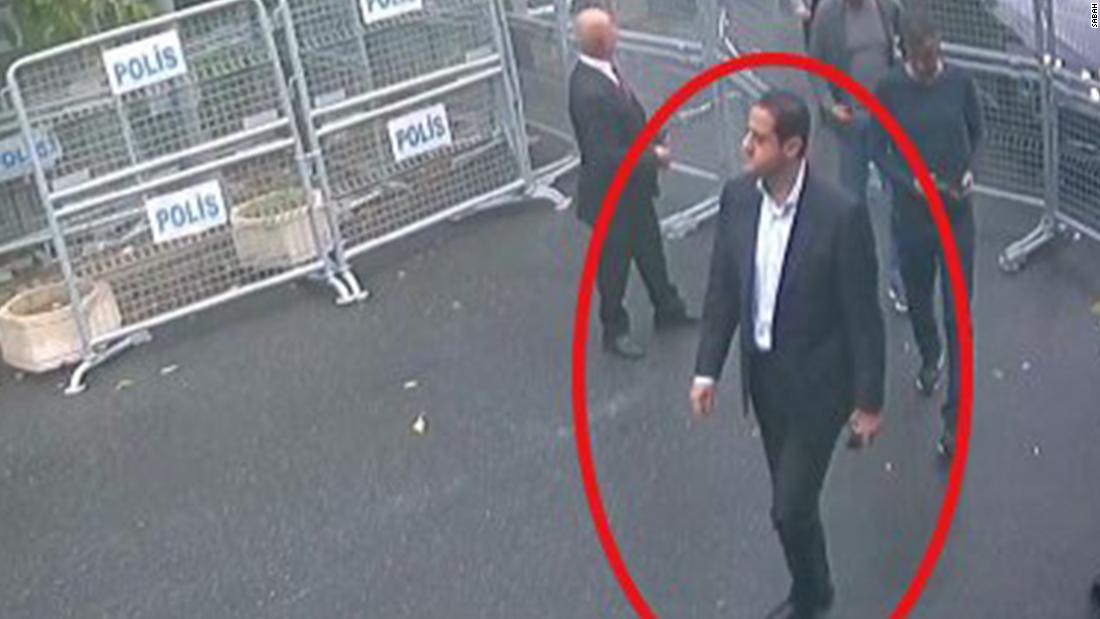 Mutreb, who was the first secretary at the Saudi embassy in London and has been described as a colonel in Saudi intelligence, is closely connected to Saudi Crown Prince Mohammed bin Salman. “He was seconded to an elite protection brigade within the Royal Guard to serve as the personal security force of [the crown prince],” a Saudi source told CNN.
Mutreb appeared in photographs alongside bin Salman during the crown prince’s tour of the United States earlier this year.
Several US officials have told CNN that any operation involving members of the crown prince’s inner circle could not have happened without his direct knowledge.
Security camera images that purport to show the movements of Mutreb, one of 15 Saudi men believed by Turkish authorities to be connected to the disappearance and apparent death of Khashoggi, were published Thursday by a Turkish newspaper.
Turkish investigators continue to hunt for clues to what happened to Jamal Khashoggi amid growing indications that some of the men allegedly responsible for the journalist’s killing have close ties to the highest levels of the Saudi government.
The four images, which pro-government paper Sabah said it obtained from Turkish security sources, purportedly show Mutreb in Istanbul on October 2.
Khashoggi, a Washington Post columnist, visited the Saudi consulate in Istanbul on October 2 to obtain papers that would have allowed him to marry his Turkish fiancée. The insider-turned-critic of the Saudi government has not been seen since.
The surveillance images purportedly show:
The images and their time stamps are consistent with what CNN has previously reported about Mutreb’s movements on October 2, based on Turkish sources. The images of the person closely resemble others CNN has obtained of Mutreb. 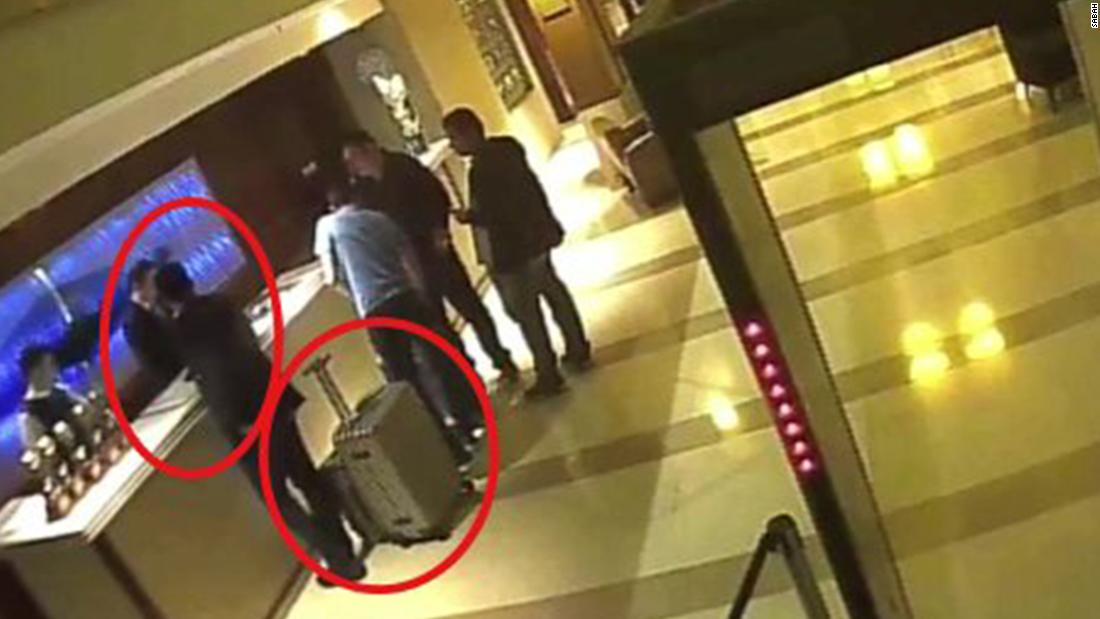 Turkish officials also provided CNN with passport scans of seven other men they suspect to have been part of the 15-member Saudi team. The passport scans were taken on the day of Khashoggi’s disappearance.
One of the passport scans appears to belong to Salah Muhammad al-Tubaiqi (spelled Salah Mohammed A Tubaigy in the document), listed as the head of forensic medicine at the Saudi Ministry of Interior.
In a 2014 interview with Asharq al-Awsat, a London-based Saudi newspaper, Tubaiqi lauded a mobile clinic designed to carry out autopsies in a record seven minutes as the first of its kind in the world. Tubaiqi, who was working as the forensic consultant and supervisor of the clinic at the time, told the newspaper it was his idea to design the clinic to allow coroners to perform forensic examinations and dissect bodies at crime and accident scenes. 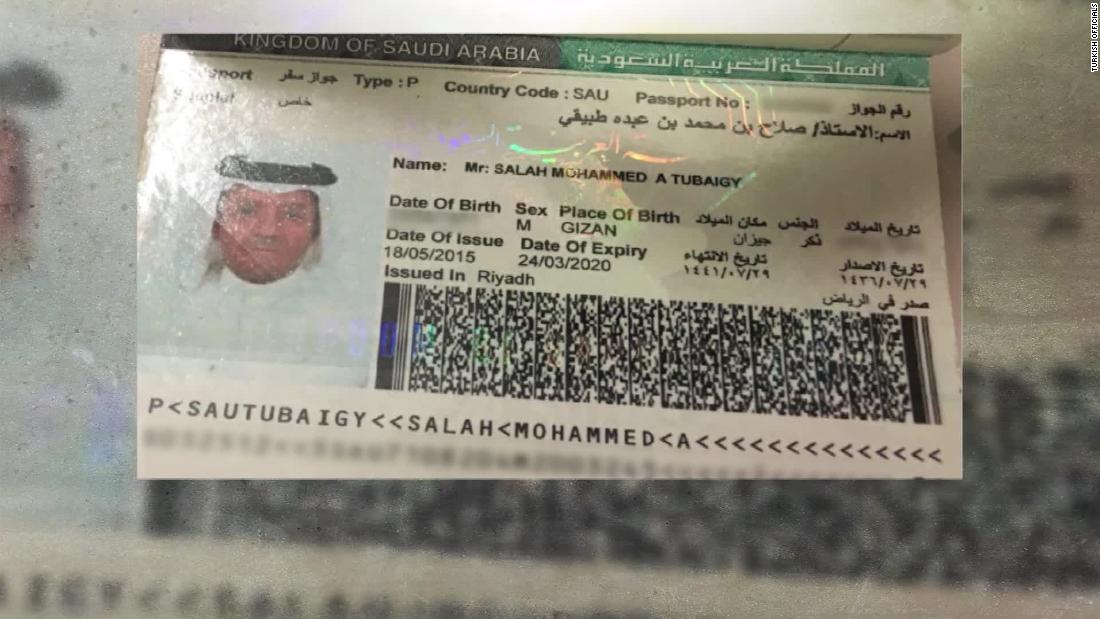 Tubaiqi spent three months studying at the Victorian Institute of Forensic Medicine (VIFM) in Australia starting in June 2015, a spokeswoman for the institute, Deb Withers, told CNN on Thursday.
Tubaiqi was there as a forensic pathologist and his study was paid for by the government of Saudi Arabia, Withers said. He was the head of Saudi Arabia’s Forensic Commission at the time of his visit to Australia, VIFM’s annual report from 2014-2015 notes.
Withers told CNN that Tubaiqi’s focus while at the institute was on methods in mass body identification, particularly related to the Hajj, according to his application for the placement at the VIFM.
Withers said Tubaiqi spent time viewing autopsies, viewing procedures in the mortuary and learning from radiologists concerning CT scans. He was not permitted to perform autopsies or any other procedures. 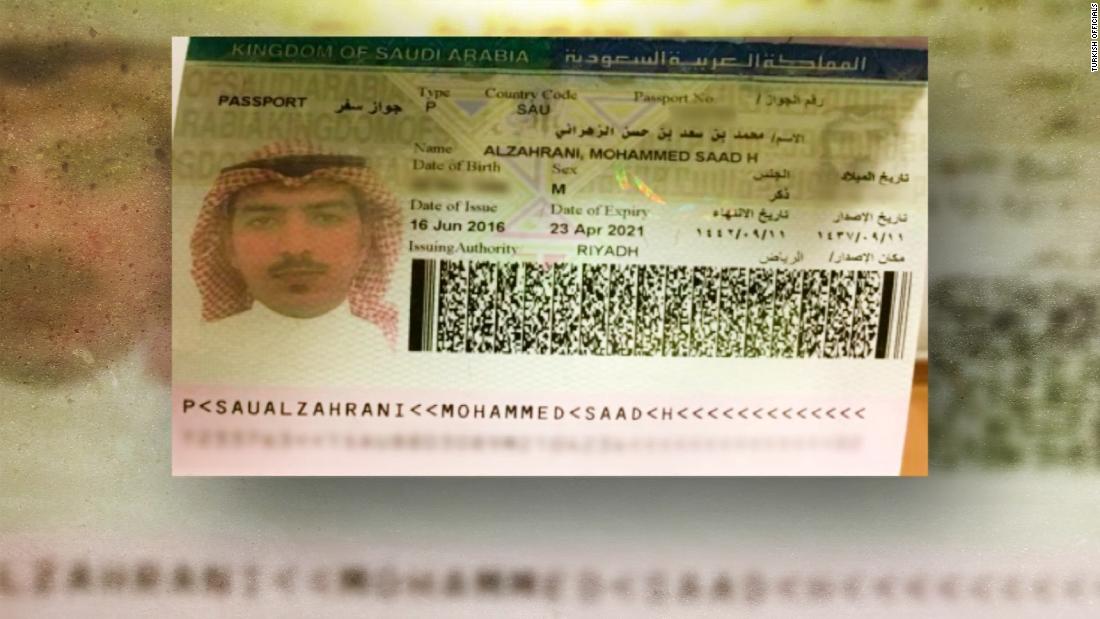 Another member of the group identified by Turkish official media and appearing in the passport scans is Muhammad Saad al-Zahrani, who has appeared on Saudi state TV alongside bin Salman. His name is spelled Mohammed Saad Alzahrani in the scanned document.
Turkish investigators wearing hazmat suits searched the Saudi consul general’s residence in Istanbul on Wednesday, two days after the Saudi consulate in the city was searched.
The search at the residence, which also involved dogs, went into the early morning hours Thursday. There was no word on whether anything was discovered.
Turkish officials have told CNN that Khashoggi’s body was dismembered after he was killed in the consulate. Riyadh has denied any knowledge of his whereabouts.